Most popular reads for 2019 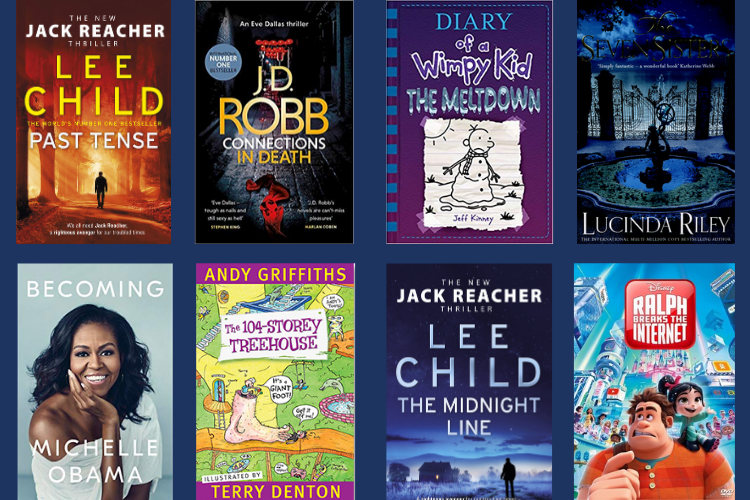 Becoming by Michelle Obama was the most popular non-fiction book, coming in with twice as many issues as the next most popular The note through the wire by Doug Gold.

Ralph breaks the Internet, a 3D computer-animated comedy by Disney, was the most popular DVD.

Fiction
Past tense
Connections in death
The seven sisters : Maia's story
The midnight line
Still me
The moon sister : Tiggy's story
The storm sister : Ally's story
Something to tell you
The pearl sister : CeCe's story
The house across the street
Sisters and brothers
The shadow sister : Star's story
The dream daughter
The tattooist of Auschwitz
Someone like you
Worth dying for
Under currents
True blue
Long road to mercy
After you

Non-Fiction
Becoming
The note through the wire
Educated
Easy keto : 70+ simple and delicious recipes : reclaim your health with a ketogenic diet
This is going to hurt : secret diaries of a junior doctor
Eat
Rich enough? : a laid-back guide for every Kiwi
Guinness world records 2019
The beginner's ketodiet cookbook : over 100 delicious whole food, low-carb recipes for getting in the ketogenic zone, breaking your weight-loss plateau, and living keto for life
Homemade happiness
Together
The boy who followed his father into Auschwitz
Low carb, healthy fat : the simplest way to achieve and maintain a healthy weight : with more than 130 low-carb, keto-friendly recipes
The quest for Queen Mary
The keto diet cookbook : more than 150 delicious low-carb, high-fat recipes for maximum weight loss and improved health
The fast 800 : how to combine rapid weight loss and intermittent fasting for long-term health
Guinness world records 2018
Winx : the authorised biography
What the fat recipes : more than 130 low-carb and keto-friendly recipes for you and your family
The keto diet : a 60-day protocol to boost your health

Teenage Fiction
The fault in our stars
The ghostfaces
The general
The caldera
Slaves of Socorro
Scorpion mountain
P.S. I still love you
Mad dogs
The scorch trials
The outcasts
The hate u give
Scorpia
Maximum security
Girls of paper and fire
Fugitive
Crocodile tears
Always and forever, Lara Jean
Wonder
Throne of glass
The wicked king

Winter reading challenge for all ages

Time to get creative!