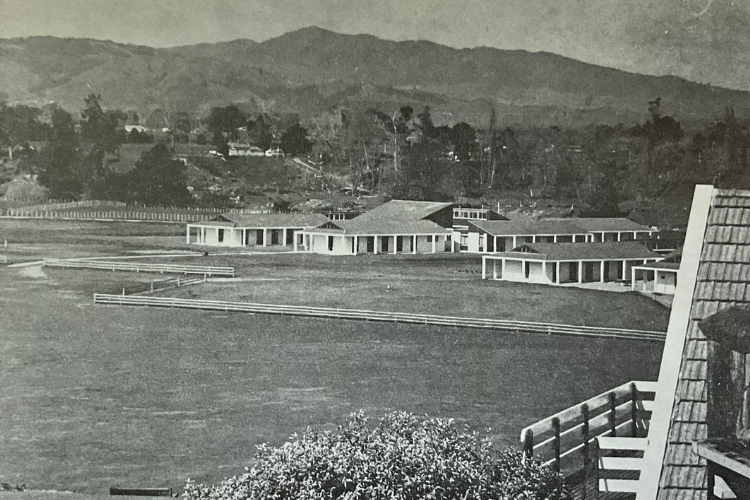 Viewpoint St. Peters School, Cambridge N.Z. with black text reading Number one September, 1974
with the School crest in the top left corner.
The front page has a message about the publication from J.E. Horton, Chairman, St. Peter's School Trust Board followed by an article under a blue heading "St. Peter's Genesis" on the beginning of the school with an accompanying concept image of an aerial view of the school.
Further headings include:
Pg.2 (with a image of a memorial to founder A.F.B. Broadhurst)
Official opening of the preparatory school
Prize day 1936
David Thornton
Pg.3 (with a photo of the senior school)
The Senior School
Pg.4 with a photo of two play fighting students
St Peter's offer to young men, Demand for secondary education, Building Programme (covering 1970-1975)
Pg.5 Photo of the cafeteria and mathematics lab
Naming the boarding houses
Pg.6 With photo of the rowing team
House opened by founder, Rowing
Pg. 7 with photo of the sick bay
Why the independant school, The Farm
Pg.8 (last page) with photo of the dairy farm
Future finance, Open day

21 x 29.7 cm (A4) Robins egg blue unsigned Letter of Acknowledgment from the St Peter's School Trust Board to contributers to the School's Development Programme.
Supporters include:
Parents and present pupils 151
Old boys, past parents and friends 173
Total of individual supporters 324
Auckland Savings Bank
Bank of New South Wales and others

The letter ends with a blank space for a signature followed by
Chairman,
St Peter's School Trust Board
(includes a note "At the time of publication of this issue of Viewpoint"
Incuded in this collection is a September 1974 edition of Viewpoint)

12.7 x 10.23cm slighty yellowed Postcard with blue text issued with the Viewpoint magazine by St Peter's School for attendance confirmation to the 1974 open day.
The front reads:
Business reply post
Postage will be paid by the- The Bursar, St Peter's School, Private Bag, CAMBRIDGE
Authority No. 9 Cambridge, N.Z.
WIth a series of horizontal lines where the stamp would be placed.
The reverse is headed: Open Day '74 at St Peter's School Cambridge
and has details on the open day, response options and space for sender details. 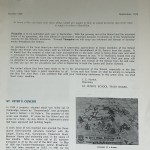 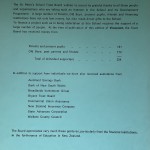 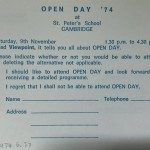