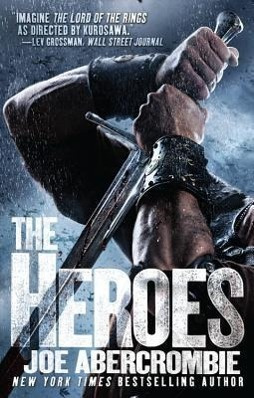 Set after the original First Law trilogy this stand alone novel takes place in the disputed land of Angland, A northern territory ruled by the Union for over 600 years. But the North, led by their bloodthirsty and violent Ruler Black Dow has plans to take it back.

The entire novel is broken down into 3 parts each represents one of the 3 days of battle that occurs. You get to see both sides of the war and the motivations behind it. Also, the battles are not glamorised, there are no heroes, no 'good guys' and 'bad guys' just scared people following orders trying to survive, and a lot of people don't.

This is an amazing read, Joe Abercrombie has done an incredible job with this book and it really lives up to the ‘Grimdark’ genre. Fans of The First Law trilogy will love it with familiar side characters from the trilogy getting to be main POV characters here. You don't need to read the trilogy to understand what's going on but it would definitely make it more enjoyable.

If you're a fan of fantasy novels or warfare then I would highly recommend this.

[While this is #5 in the series, it is a stand alone. So there's the first trilogy, then 3 stand alone novels that are in the same fantasy world but set after the original trilogy with different characters.]