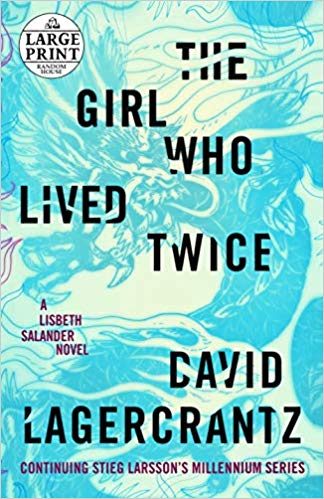 This story is a continuation of the Millenium series.

Steig Larsson planned the series as having ten instalments, but due to his sudden death in 2004, only three were completed and they were published after his death. The Girl with the Dragon Tattoo in 2005, The Girl Who Played with Fire in 2006, and The Girl Who Kicked the Hornets' Nest in 2007.

There has since been The Girl in the Spider’s web (2015) and The girl who takes an eye for an eye (2017), which including this one were written by David Lagercrantz, who was commissioned by Larsson’s publisher.

This is now number 6 in the series.

Lisbeth Salander is the girl with the dragon tattoo.

She has disappeared and she’s told no one where she is. She's sold her apartment in Stockholm but she’s still keeping an eye on it from afar.

She’s trying to stay one step ahead, and still has the feeling that she is being watched despite covering her tracks. And she wants to strike before the enemy strikes first.

Her primal enemy, her twin sister, Camilla (Kira), is now squarely in her sights. A near miss early in the book sets up what is to follow. Lisbeth is after revenge. She also has information that no one else seems to have to use to her advantage.

Mikael Blomkvist meanwhile is trying to reach her. He needs her help with the identity of a man who lived and died on the streets in Stockholm seemingly under suspicious circumstances. The man does not exist in any official records but he has Blomkvist’s mobile number in his pocket and Mikael recalls seeing him in the streets. His last words hinted at conspiracy theories involving the Minister of Defence.

Once again, Salander and Blomkvist work together to help each other. But with Kira also looking to destroy Lisbeth, its Mikael who also finds himself targeted as Kira uses Mikael as a way to get to Lisbeth.

Who will find who first, and who will put their past to rest?

The intrigue builds throughout the book and the characters are always looking over their shoulders. There are personal relationships to follow, stories from character’s pasts which fill in the story surrounding the Minister of Defence and Lisbeth’s quest for revenge and why.