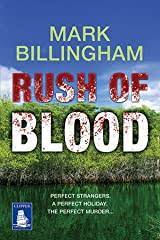 Rush of Blood is one of only a handful of Mark Billingham's stand alone novels, most of which feature Detective Tom Thorne.

I admit I'm not sure if I have read one that hasn't featured Thorne, so this was a surprise, and a surprise to me that it was one of his books that I hadn't yet read.

Three couples from the UK are on holiday in Florida, Angie and Barry, Sue and Ed and Marina and Dave. All the couples are quite different, but in a holiday setting where life's a beach or a pool and there are a few beers and wines to be had they all get along well.

They are a little curious about a mother and her daughter, who has learning difficulties. But then the daughter goes missing (later found dead) the day before they are all scheduled to leave.

Detective Jeff Gardner takes a personal interest in the case and back in the UK DC in training Jenny Quinlan is our police officer. She has to follow up all the UK visitors who were in Florida at the time. Despite her junior status, it is she who pushes the boundaries.

The couples get together for three dinners throughout the book, where they can't help but discuss what happened, and further to that half way through there is another child taken, but this time in the UK, which makes them of interest to police again.

The book highlights reasons why any of them might be the perpetrator, but you're still not sure, and then even when it appears to be revealed, there's a twist!

It's the kind of book you'd like to read again, to see if the clues throughout make you any the wiser to the twist at the end.