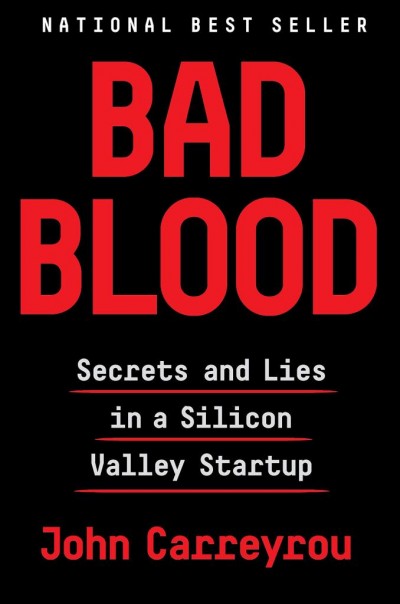 Bad blood: Secrets and lies in a Silicon Valley startup

John Carreyrou is a French/American reporter and received the 2018 Financial Times and McKinsey Business Book of the Year Award for the investigative reporting, culminating in this publication of this book. Theranos a start-up bio-tech company, headed by Elizabeth Holmes claimed to be developing high tech, blood testing technology that would revolutionise blood testing in third world countries as well as making blood testing through simple technology available at chemists.

Elizabeth Holmes a young student from Standford University (she never graduated) and who styled herself on Steve Jobs, to the extent that she dressed like him and used his language style and lowered her voice making it deeper, set up Theranos a bio-tech with the idea of developing the break through technology. She had by her side Sunny Balwari who was Chief Financial Officer, business manager, protector, bully and lover.

Initially the idea developed with the best of the young Silicon valley technical people, was shown to be ground breaking with huge investment and a powerful and influential Board of Directors; David Boise an American lawyer and chairman of an influential law firm, Riley Bechtel CBE – millionaire, James Mattis – USA Secretary of Defence, among many elite American business people (mainly men).

As the development and testing on the huge project proceeded it became apparent to the staff that the technology did not work as claimed. Every time a test failed, the board was convinced by Elizabeth and Sunny that more investment was needed to explore more development and the board believed the story and Elizabeth and Sunny and raised millions for futher investment.

Theranos expanded to nearly 800 people, but the technology never delivered what Theranos claimed the blood testing technology could do. Theranos did not have any medical technicians or scientists on their staff to ensure the technology met the standards medically and for the Food and Drug Administration (FDA) criteria. This was the start of the complex cover up by Elizabeth Holmes and Sunny who deceived everyone by not allowing anyone in the Theranos organisation to have fully visibility of the blood testing technology results, tests, development.

Elizabeth Holmes as the face of Theranos managed the cover up with Sunny through strict clauses in employment contracts, bullying, lies, deception and no evidence of the testing/ negative testing ever reported.

Why did Elizabeth Holmes keep the pretence and not admit the failures? Did Elizabeth Holmes believe that finally through more investment Theranos would prove to be ground breaking? Was Elizabeth Holmes so caught up in the persona of Steve Jobs she forgot her real role in Theranos? Why did the board not ask for more details? They only proved on many occasions to be ineffective in their governance role but brilliant at raising bio-tech investment. The company at its peak was valued at $9 billion Where did all the investment go?

Then it all came crashing down!

This story ends in the courts in 2020. Through the investigations both by John Carreyrou and the Food and Drug Administration (FDA), Theranos and Elizabeth Holmes are headed to court in 2020. It will be interesting listening to the evidence from the players and the legal teams play out.

A film is also due out this year.